I started college at Kutztown University as a psychology major. I ended up regretting my decision. I think I rushed into attending KU without fully comprehending it. I didn’t think about how it would be, attending a townie school instead of a state school. Most KU students come to college with a good portion of their high school classmates and commute from home, no longer than 20 minutes away from campus. So, it wasn’t much of a welcoming environment because everyone else was settled with their friends and home while I was starting over. I did end up making a few great friends, but there were many reasons for transferring out – 15,000 students was too large for me, I wasn’t sure about my major, KU mainly specializes in education majors, and overall it just didn’t feel like a good fit.

I looked around at other colleges with a new perspective and an open mind. I thought more about my future and my career path. Delaware Valley College, or Del Val, popped out at me. It was a much smaller school, consisting of merely 2,000 students. My mom talked to her friends about my situation, and one of her friends just so happened to know a girl my age at Del Val – Laura (I know, same name as me… freaky coincidence!) So I signed up for a tour at Del Val and arranged to meet up with Laura G afterwards. I talked to her and a few of her friends to get the inside scoop about Del Val and to figure out if the risk of transferring schools would be worth it. Immediately I felt a good, strong vibe about the college. The people seemed so friendly. The campus was beautiful – with the gardens, gazebos, lake, and little trails. KU had a nice campus, but nothing compared to Del Val. KU’s campus felt more utilitarian, while Del Val’s campus felt like it had true personality.

And that’s why I love Del Val: it’s authentic uniqueness. It’s not a state school, nor is it a community college. It’s a small, private college with a deep focus on agriculture. It offers a kind of experience that you will not find at any other college. Every class comes with hands-on experience. It’s not just about sitting in lecture, taking notes, and being tested. It’s about getting your hands dirty, trying new things, and being pushed out of your comfort zone. They don’t just offer biology as a major; they offer small animal science, large animal science, wildlife management & conservation, zoology, and several other specific majors you won’t find at other schools. Thanks to Del Val, I was able to practice working with REAL animals: rats, mice, hamsters, guinea pigs, rabbits, cats, cows, chickens, insects, reptiles, and even fish! I was able to take cool classes you won’t find anywhere else such as Introduction to Animal Management, Animal Training & Enrichment, Canine Behavior & Training, Animal Behavior, Animal Welfare, Human & Animal Interaction, and so on. I’m proud of the education I received. 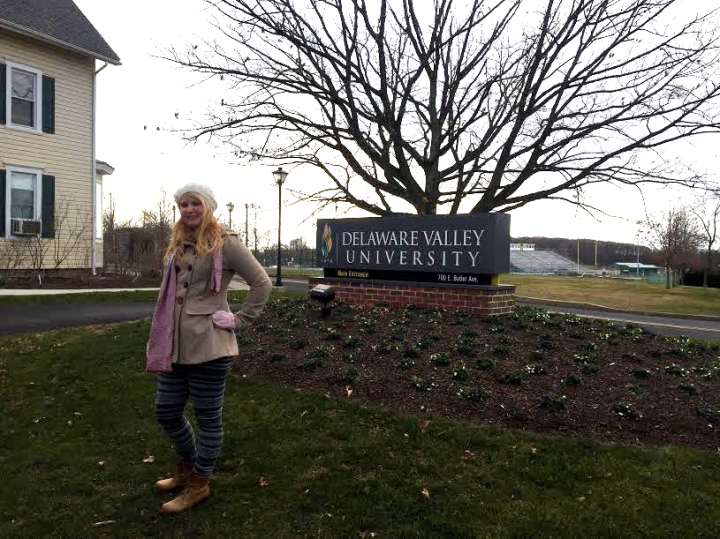 I came to Del Val at a crucial time. When I first transferred, people were discussing Del Val possibly reaching university status. Sophomore year, they built a brand new building for more classes with a Starbucks kiosk. Del Val started rapidly expanding right after I had arrived.

Delaware Valley College became a university my junior year. It was a bittersweet experience. The staff and faculty, especially the president, was ecstatic about becoming a university because it “looks good” and means more money for them. But the students felt much differently. We were upset that Del Val was on the road to losing its individuality and becoming just another plain old university. Some people even transferred out because of this. Us agriculture majors were annoyed that Del Val was taking its attention away from our majors, and instead, focusing on the new majors such as business and criminal law. Since this change, Del Val has been obsessed with quantity and has completely disregarded quality in order to compete with other universities and climb its way to the top. The new Life Science building that was added my junior year is very nice and modern, but before it was built, it was a garden area I used to sit at with my friends. Quality professors are retiring and Del Val is struggling with trying to find decent replacements. With more students being accepted every year, parking spaces have become much more scarce. And, also with becoming a university, comes the implantation of stricter rules. So, on one hand, I suppose graduating from a university as opposed to a college looks better on my resume. But I feel sorry for the younger classes who come to Del Val when it becomes too late to appreciate its uniqueness and impressive agricultural focus. I hope that the future agriculture students of Del Val get the same amazing opportunities I had. I hope Del Val never loses its character.

College was a time of major growth for me. I had a lot of difficult experiences along with many great memories. I feel like a very different person than the person I was freshmen year.

Now I am cleaning out my apartment and pretty soon I will be home again in NY. In the future, when I have the space and the funds, I am really interested in starting my own animal-related business. I’ve had a few ideas in my head for a while now. I can’t say for sure how everything will specifically work out. Until then, I’ll be working at different places and developing my skills as an animal-caretaker. Personally I am not fully motivated to chase after a large paycheck. I want to save the world and live my passion. I want to help the animals!